Hilton plans to build more than 1,000 Home2 Suites in China; Chinese hotels are in desperate need of strategies to compete with Western chains.

Bloomberg reported that Chinese residents will be allowed to visit the EU, on the condition Beijing will also allow European citizens to travel to China. But even if some countries have implemented an open policy for Chinese tourists, there is a high probability that China will not initiate organized and individual overseas travel, given the risk of overseas epidemics, and the quarantine time after returning to China, Ge Lei, vice president of China Tourism Marketing Association told the Global Times.

>> In light of calls for a nationwide boycott of Chinese goods by a trade body in India, the Delhi Hotel and Restaurant Owners’ Association which claims to represent 3,000 budget hotels and guest houses in India’s capital has pledged to also ban Chinese citizens from their hotels and restaurants.

Hilton to build over 1,000 sub-brand hotels in China

>> Hotel giant Hilton is expanding in China despite COVID-19's toll on the hospitality industry. Hilton said it will work with Funyard Hotel Investment, a subsidiary of Chinese real estate developer Country Garden, to build more than 1,000 Home2 Suites in the country. China's hotel markets are recovering. Data from Lodging Econometrics show that the country has 2,330 projects and 412,142 rooms presently under construction.

>> With more international brands turning to the growing China market, Chinese hotels are in desperate need of strategies to compete with the quality service and facilities offered by their western counterparts. Researchers of the School of Hotel and Tourism Management at The Hong Kong Polytechnic University show Chinese hotel managers how their hotels are falling short of international standards, and what they can do to close the gap.

>> China saw a steady recovery in travel activities during the three-day Dragon Boat Festival, with travel rebounding to about 50% of last year's level. The recovery came despite a spike in coronavirus cases in Beijing, which bodes well for China's consumption market.

China recovery as prediction model for US and Europe

>> As the initial epicenter of the COVID-19 outbreak, China trends could serve as a projection model for phased recovery around the world. Modeled after the behavior in China, Koddi has developed two potential projection paths that the U.S. and European markets could take: the standard recovery with a steady uplift through June, eventually approaching pre-COVID levels headed into 2021, and the aggressive recovery with demand significantly outpacing the standard model during the second half of the year. 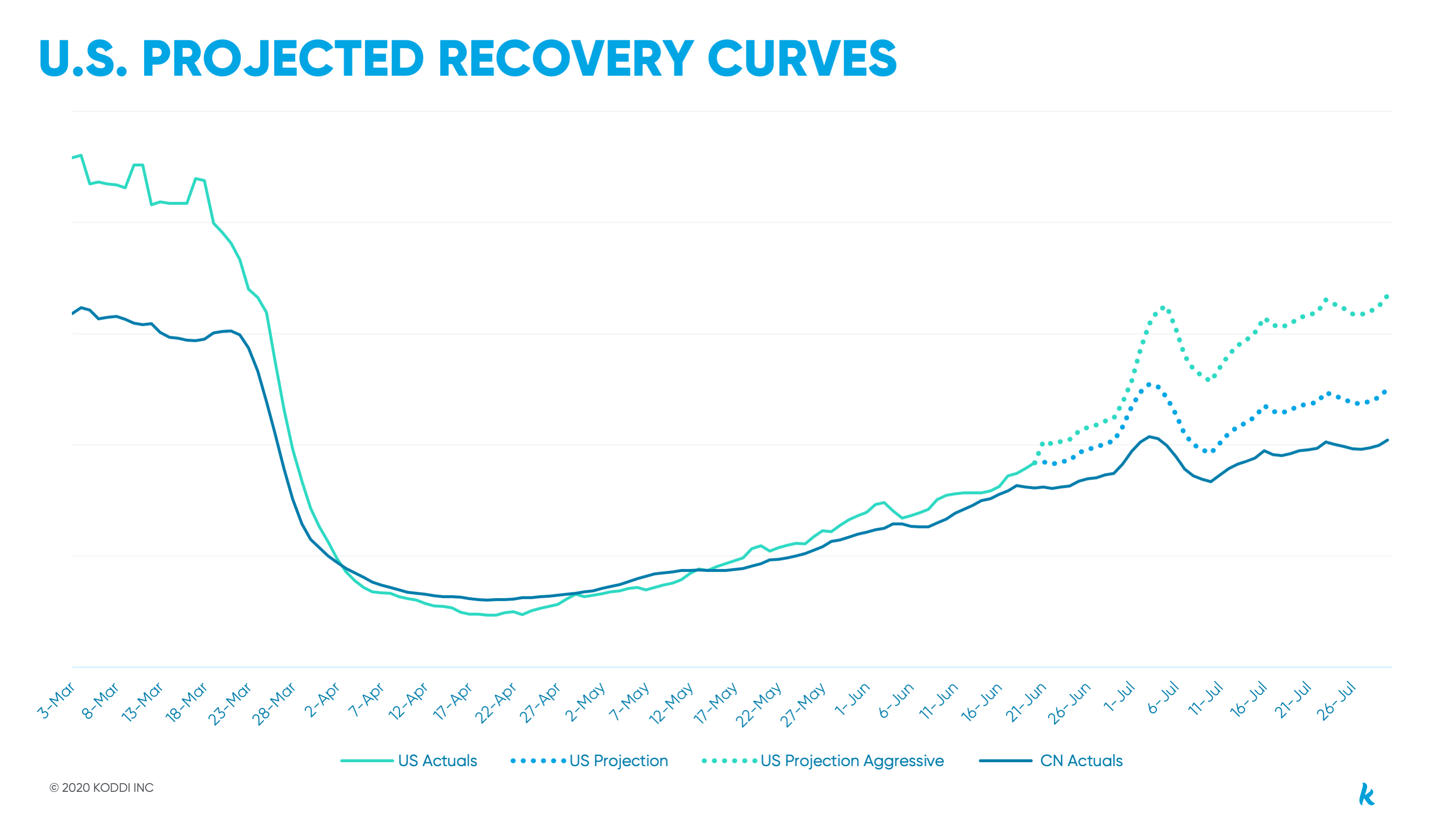 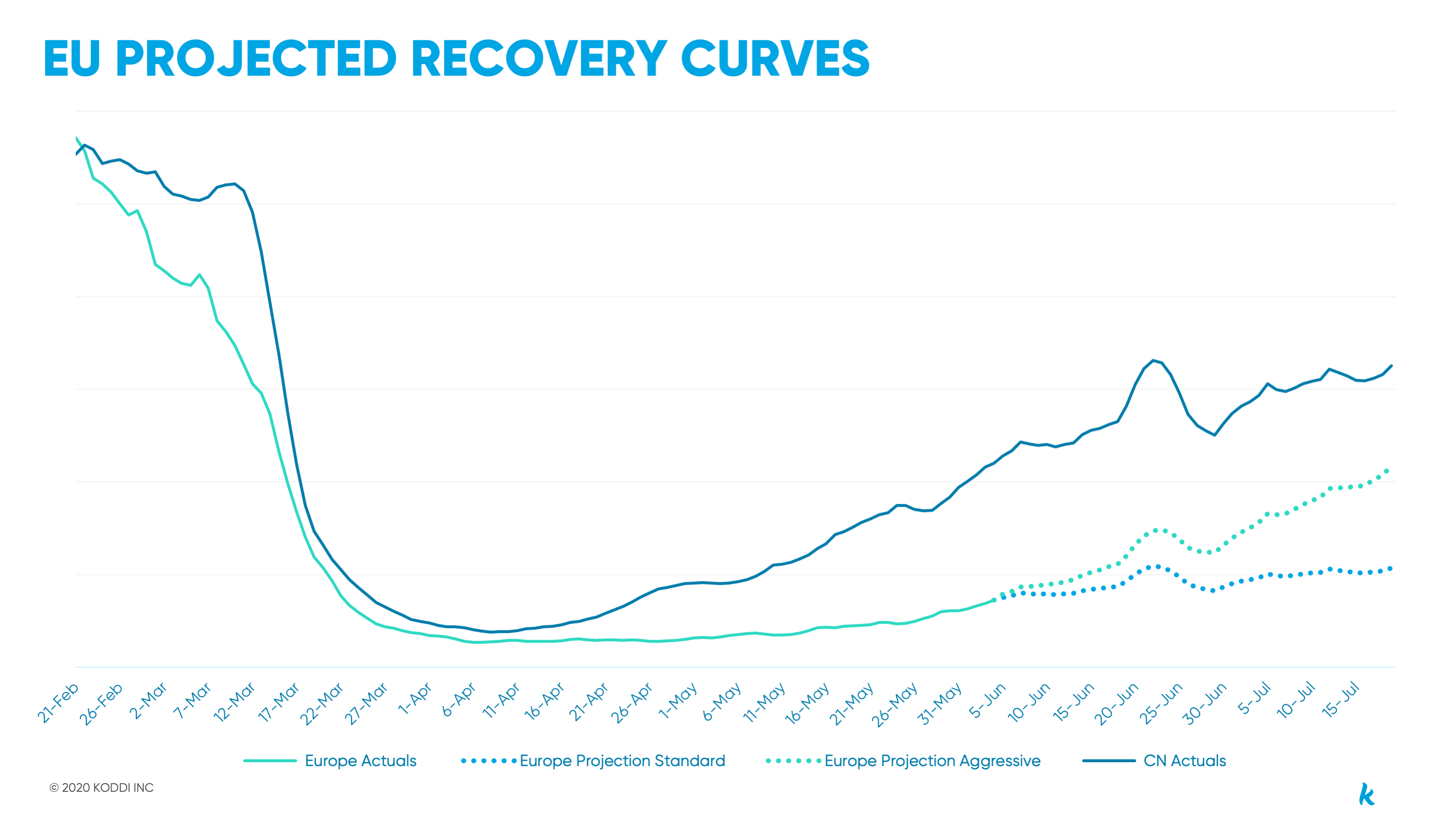 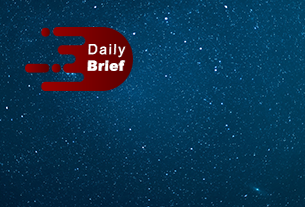 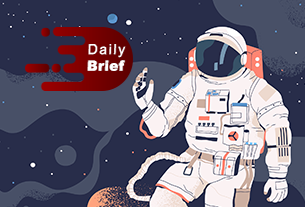