China Tourism Academy (CTA) and Ctrip jointly reported on February 6 that an estimated 5.7 million to 6 million people would travel overseas (not including Hong Kong and Macao) during the 2016 Spring Festival holidays, and the travelers were expected to spend an average of RMB 15,000 per person, inflating China’s outbound travel expenditure to RMB 90 billion.

The Ctrip data indicate an increase of more than 10% in outbound travel volume during this year’s Chinese New Year period, from 5.182 million in 2015 to a new record high of at least 5.7 million this year (the numbers do not include those traveling to Hong Kong and Macao). Ctrip’s tallies of tour and FIT bookings indicate that some 53% of the Spring Festival travelers chose to go abroad.

As income level rises and paid leaves become more commonplace, Chinese outbound travel and overseas spending continue to grow in recent years. With the streamlining of visa policies by destinations and more international flights becoming available, more and more Chinese tourists, especially young people, are traveling overseas for the Spring Festival holidays instead of returning to their home towns.

China’s outbound travel was booming throughout 2015. According to data from China National Tourism Administration (CNTA), Chinese citizens made 120 million outbound trips in 2015, increased by 12% YoY (outbound destinations including Hong Kong and Macao), with tourist spending reaching a total of USD 104.5 billion (about RMB 686.7 billion), up by 16.7%.

Ctrip’s report on the Spring Festival holidays revealed that the most popular outbound destinations in 2016 were Thailand, Japan, South Korea, followed by Hong Kong, Taiwan, Singapore, Indonesia, the USA, Malaysia and Vietnam. Southeast Asian countries such as Thailand, Indonesia, Malaysia, Vietnam and Philippines registered the fastest growth in visitor numbers from China this year. About 30% of the outbound travelers picked island destinations.

According to data from the Ministry of Commerce, Chinese consumers bought 46% of the world’s luxury products in 2015 and 78% of the purchases were made overseas.

Chinese outbound shoppers flooded duty-free stores in Japan during the Spring Festival holidays, and Japanese malls cater to Chinese visitors by adopting Alipay on popular counters and beefing up the Chinese language service for shopping guides. Malls in South Korea reported 70% increase in sales during the CNY period, thanks to the hordes of Chinese shoppers. Projections by Thailand’s tourism authorities show that Chinese travelers made at least 1 million trips to Thailand in the Spring Festival, and at least 8,700 extra flights were mounted by Thai carriers to ferry Chinese visitors. Other destinations such as Dubai, Los Angeles and the Maldives also put up traditional Spring Festival decorations to attract Chinese visitors.

China has been the world’s largest source market for outbound travel spending since 2012 and Chinese travelers have been contributing over 13% to the annual revenue of global tourism on average, according to the World Tourism Organization. China has been the global leader in outbound visitor population and overseas spending for the past three years. (Translation by Jerry) 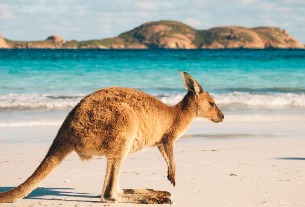