Globally, Emirates Airline has a strong lead over other airlines with a Safe Travel Score of 4.4 out of 5.0.

Safe Travel Barometer, a comprehensive database of COVID-19 health and safety protocols and traveler experience initiatives announced by suppliers that influences traveler decisions in the new normal, announced an update to its Safe Travel Score for more than 230 airlines worldwide.

The various initiatives announced by airlines are assigned to one of the following subcategories. These initiatives have either a direct or psychological impact on traveler booking and traveling decision in the "new normal":

Air China, among Asia Pacific’s largest airlines, emerged as the leading carrier with a Safe Travel Score of 4.1 out of 5, having carried out various traveler health and safety initiatives. Air China was among the first carriers globally to resume domestic services after the COVID-19 outbreak grounded its fleet earlier in 2020. While the airline had basics covered such as mandatory face masks and sanitizers for passengers on their journeys, it also initiated fogging of the aircraft before or after every flight. 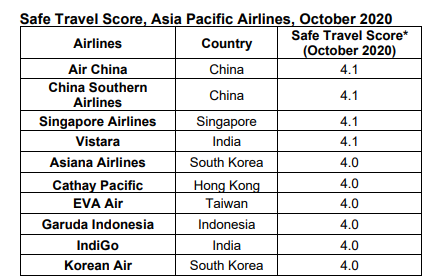 Initiatives of 72 airlines were evaluated across APAC, out of which 11 airlines (15%) scored a Safe Travel Score of 4.0 or above – the highest ratio worldwide. All carriers on the APAC leaderboard had a rating of 4.0 and above, including China Southern Airlines, Singapore Airlines and India’s Vistara (4.1 each); Asiana, Cathay Pacific, EVA Air, Garuda Indonesia, Korean Air and Australia’s Qantas Airways (4.0). Only one low-cost carrier made it to the APAC leaderboard – India’s IndiGo (4.0). Each airline is undertaking major operational reviews to adjust to the new market realities. 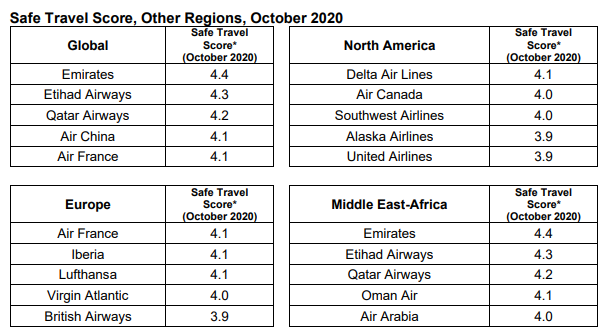 Globally, Emirates Airline has a strong lead over other airlines with a Safe Travel Score of 4.4 out of 5.0, having implemented numerous pro-traveler health and safety initiatives.

Here’s where Chinese airlines are flying to in the United States
©2020 广州力矩资讯科技有限公司 粤ICP备06070077号
Tell us more about yourself!