Home > > Airlines add more capacity this week and capacity is much stronger than this time last year!

Airlines add more capacity this week and capacity is much stronger than this time last year!

We have made a number of significant steps in the global capacity recovery when compared to this time last year.

The headline numbers suggest that global capacity has seen a slight recovery back to 61.9 million seats this week, a 1.2% increase. However, as the weekly capacity was being finalised further significant capacity cuts were yet to be supplied by many of the major Indian airlines and Fiji was about to enter a lockdown; the Fiji numbers are minor but India normally accounts for around 2.6 million seats so in truth global capacity is probably down week on week.

Hopes for that capacity bounce we are all hoping for and subsequent release of pent-up demand remain some way off. Airlines removed another one million seats for the remainder of April over the last week and worryingly some 13.3 million for May and 12.5 million for June; yes, that’s nearly 26 million seats dropped for the next two months. Airlines are clearly not expecting a recovery in the near future, or at least not as strong a recovery as originally hoped. 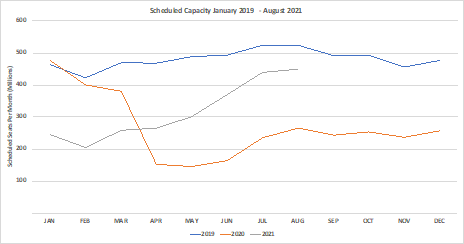 With such little change in the weekly numbers and therefore China still the largest country market and American Airlines ranking as the largest airline in the world we have taken a look at how the numbers have changed against this week last year. It makes the numbers look a lot better when you change the comparison point, especially when the week of the 27th April 2020 was one of the low points in the Covid-19 pandemic for the industry.

As the table below highlights every region suddenly looks positive when comparison is made to the same week last year. Taking Western Europe as one example, capacity has doubled since this time last year which would be an exceptional result in most circumstances but in comparison to pre-pandemic volumes remains at just 28% of its normal capacity levels. The Southwest Pacific region has seen capacity increase four-fold when compared to last year with both domestic services and the Tasman Bubble now open.

Capacity by country provides a reminder of those countries that at least from a capacity perspective there are still country markets with less capacity this week than in the same week last year; both Indonesia and Italy fall into that category amongst the top twenty country markets. Outside of the top twenty, other country markets that still have less capacity than at this stage last year include Hungary, Oman, Venezuela and Algeria, all of which once again highlights that every country is at a different stage in their “Covid-19 experience” and that we remain a long way from having any confidence in a recovery this year.

Likely reductions in capacity from India next week and quite a strong increase in capacity from Japan could result in the two countries swapping positions next week whilst capacity in Russia increased by some 12% week on week so we are likely to finally see some movement in this chart. A 30% reduction in weekly capacity from Thailand places their position in the top 20 at risk next week should further capacity cuts follow this week; Iran is ready and waiting to take their place if required! 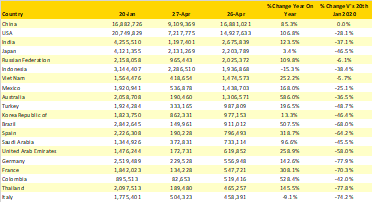 Comparing current capacity to those offered twelve months earlier provides an interesting reminder of how airlines tackled the early stages of Covid-19, Southwest Airlines operated some 2.6 million seats and American Airlines 1.8 million in the week of the 27th April; Delta Air Lines meanwhile cut capacity back to 900,000 seats. Roll forward to this week and all three carriers are operating at similar levels of capacity reduction when compared to their pre-Covid 19 levels with between 25%-20% less seats on sale.

Amongst the major US carriers United Airlines remain at just 60% of their pre pandemic capacity although of course the key measurement of any business is profitability and maybe United’s approach will end up delivering better long-term results.

We mentioned earlier that nearly 26 million seats had been removed by airlines for the next two months and in total some 36.3 million for the rolling quarter. Applying a minimum criteria of 100,000 scheduled seats a week we have identified the top ten airlines that have made capacity cuts for May – July in the last seven days and the scale of those cuts. Facing further travel restrictions and lockdowns, Air Canada head the table cutting some 43% of their planned capacity for the next three months in the last seven days while both Finnair and COPA Airlines have cut nearly one-third of their capacity. Some of these capacity cuts are based around adjusting capacity back to the current levels being operated but they also at the same time reflect how challenging this summer season is likely to be for many airlines.

Tracking global capacity at the moment feels like being on a treadmill; you take a step forward but go nowhere. A small sign on positivity quickly gets quashed by news elsewhere of a new variant or spike in infection rates and the almost inevitable reduction in capacity that follows, typically in less than a week. It is therefore important to remember that we have made a number of significant steps in the global capacity recovery when compared to this time last year. We equally still have a long-way to go but we generally know the steps, processes and protocols that will be required to continue the recovery.

This week could be an important step in shaping that recovery when the UK Governments Travel Taskforce announce their traffic light country listings. Not specifically because it is the UK but because it will also provide a broader insight on how the recovery is shaping up and which countries are likely to be open for business in the summer and beyond. Let’s hope that we get some good news later in the week…..surely they can’t mess this up can they? 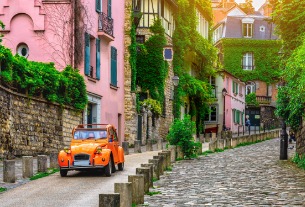 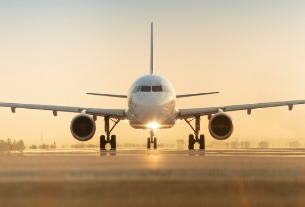 Tracking the aviation recovery: summer is over and the winter looks much better
©2022 广州力矩资讯科技有限公司 粤ICP备06070077号
Tell us more about yourself!