Air travel demand to peak during week-long holiday, but short of further rise

Regulators in China are now far more experienced in managing the dynamic aviation environment due to the pandemic.

China's domestic travel market has been widely hailed as the fastest to recover since the beginning of the pandemic. Following the onset in February and March of 2020, the market had rapidly returned to 2019 levels by the summer of 2020.

Volatility remains high because of the continued risk of COVID-19. Throughout the early phases, local governments were extremely cautious and uncertain regarding how to react to sporadic outbreaks. Consequently, regional lockdowns and inter-province travel restrictions limited air traffic significantly.

Today, relevant government departments in China are far more experienced in managing the situation and are thus able to identify cases quickly helping to avoid large outbreaks and to minimize the industry impact.

More than 76% of the mainland Chinese population has received at least one dose of COVID-19 vaccine. But air travel demand remains highly linked to the COVID-19 situation. Whenever and wherever there is an outbreak, airlines adjust capacity immediately to address the rapid decline in passenger demand. Once the outbreak is contained and travel is possible once again, passenger demand returns rapidly. As a result, China domestic seat capacity remains typically around 20% above 2019 levels, in stark contrast to other domestic or intra-regional markets which largely remain below those levels and are in some cases as much as 60% down over 2019. 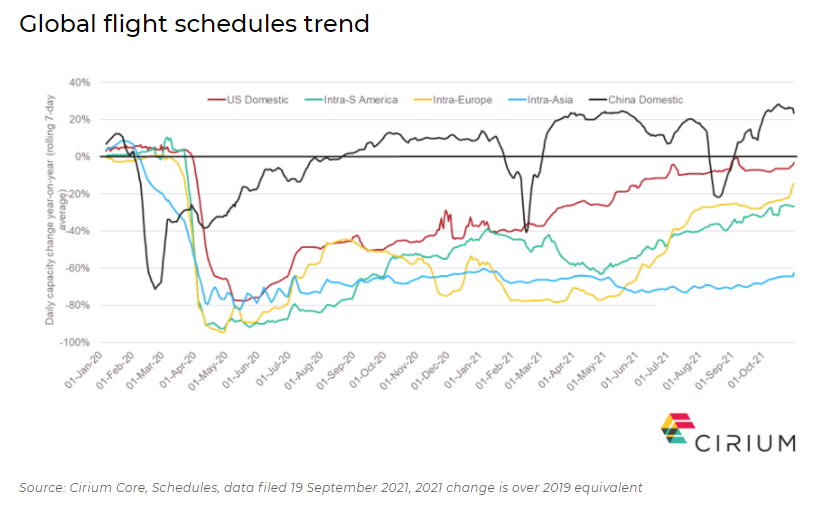 Unlike the Chinese New Year earlier this year, the government has not encouraged the population to refrain from travel during the forthcoming national holidays.

Air traffic demand is expected to peak during the National Day Golden Week of October 1-7. Cirium’s flight schedules shows that planned China domestic seat capacity exceeds both 2020 and 2019 level by 9% and 22% respectively. Airlines appear optimistic about the holiday surge, even though international borders and quarantine requirements remain in place in many foreign countries.

Beijing, Shanghai, Guangzhou, Shenzhen and Chengdu are the most popular destinations, accounting for more than 27% of total capacity between them.

However, after the long holiday, capacity and traffic are not expected to continue to grow significantly in the near term. Cirium does not see any major drivers of further demand, despite the high vaccination rate in China.

China’s zero-Covid policy conflicts with the approach of the United States and many European countries, which have similar high vaccination rates but appear to be moving towards a co-existence with the virus. With these conflicting policies, it seems there is still a long way to go before quarantine-free international travel can become widespread. For some time to come, domestic travel will continue to be the critical market for Chinese airlines. 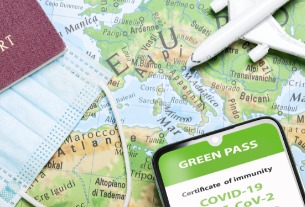 West reopens its borders, but will that affect China's 'zero COVID' policy? 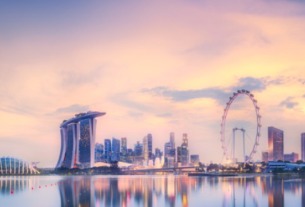 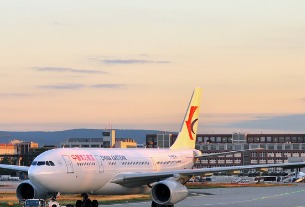 Chinese airlines looking at another year in the red
©2021 广州力矩资讯科技有限公司 粤ICP备06070077号
Tell us more about yourself!