The number of weekly international flights serving mainland China from late October through next March is set to decline by 96.8%. China Southern Airlines, which has the largest domestic network among the country’s state-owned carriers, reported the first quarterly profit since the pandemic hit, as it benefited from robust domestic travel demand over the summer.

The airline, now the world’s largest as others have pared back capacity, recorded a net profit of RMB 711 million (USD 106.3 million) following an RMB 2.9 billion loss in the second quarter.

Rivals China Eastern Airlines and Air China both reported narrower losses in the third quarter versus the second, though most international flights remain grounded.

Private airlines such as Juneyao Airlines and Spring Airlines also turned profitable due to their smaller exposure to the international market.

A surging yuan against the U.S. dollar and low oil prices have also helped bolster the bottom lines of Chinese airlines.

The outlook for the fourth quarter appears even brighter, with domestic traffic set to top pre-pandemic levels for the winter season, in contrast to foreign rivals that are reducing schedules as COVID-19 case numbers rise in the United States and Europe.

The latest official schedules showed Chinese airlines plan to operate 84,634 domestic passenger flights per week from late October through March next year, up 19.8% from a year earlier.

Shanghai-based China Eastern, which has been rolling out various “all you can fly” package deals, said its net loss narrowed to RMB 563 million in the third quarter from RMB 4.6 billion in the second.

Due to the pandemic, Chinese airlines are redirecting widebody jets from international to popular domestic routes, leading to downward pressure on fares.

The number of weekly international flights serving mainland China from late October through next March is set to decline by 96.8%, official data showed. 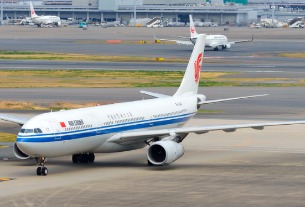