Tongcheng Travel, a Hong Kong-listed online travel company, reported that its revenue rose 5.6% year-to-year for the third quarter this year.

Loss for the quarter was nearly RMB 94 million (USD 13 million), compared to a profit of RMB 226 million for the same quarter last year. 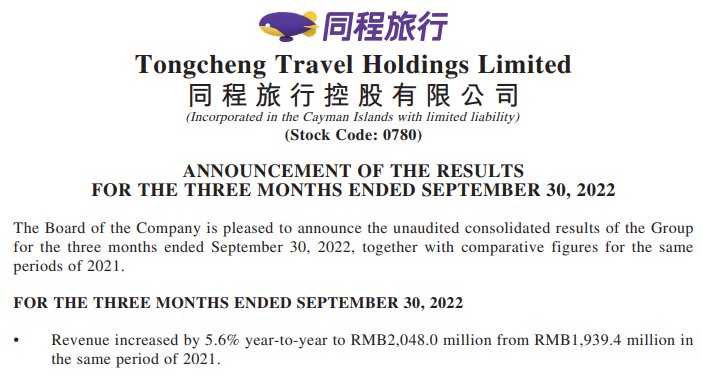 The Tencent-invested travel reservation company saw its monthly active users grew by just 1.7% during the period, while its monthly paying users increased by 9.5% in the meantime.

In the third quarter, around 80% of Tongcheng's average monthly active users was contributed from Tencent's mini program.

Gross merchant value for the quarter was RMB 40.6 billion (USD 5.7 billion), down by 1.2%. Tongcheng said that was due to the decline of air ticket and train ticket volume.

The company said its domestic room nights sold added 10% year-on-year in the lower-tier cities and bus ticketing volume posted a more than 100% rise.