Airbus’s double-decker A380 wide-body has generated more than its share of buzz but sales have been dismal. Not a single A380 has been ordered by a passenger airline so far in 2014.

Airbus’s (AIR:FP) double-decker A380 wide-body has generated more than its share of buzz. That’s understandable for a plane that can carry as many as 850 passengers and be tricked out with shower suites (on Emirates Airline and Etihad Airways), personal butlers (on Etihad), and stand-up bars for gregarious business-class passengers (on Qatar Airways, Korean Air Lines, Emirates, and Etihad). Despite these luxuries, sales of new A380s have been dismal. Not a single A380 has been ordered by a passenger airline so far in 2014. (The sole new buyer this year was Dublin-based leasing company Amedeo, which has yet to line up a single carrier to take any of the 20 jets it ordered.)

The dearth of orders for the seven-year-old plane led Airbus Chief Financial Officer Harald Wilhelm on Dec. 10 to raise the prospect of discontinuing the A380 as soon as 2018. Wilhelm’s remarks at an investor meeting in London riled customers who bet on the big plane. The next day, Airbus backtracked. Fabrice Brégier, who leads its airliner unit, told investors that upgrades to the A380—more fuel-efficient engines and a stretch version capable of carrying 1,000 passengers—will happen “one day.”

Despite such optimism, there could be financial turbulence ahead for the A380. Airbus will break even on the plane in 2015, 2016, and 2017, but that outlook doesn’t hold for 2018, forcing the company to either spend heavily to improve the economics of its engines or discontinue the program, Wilhelm said.

Although the four-engine A380, which cost $25 billion to develop, is popular with travelers, most carriers today prefer smaller twin-engine jets that are more fuel-efficient and can access more airports. Emirates is the standout fan, having ordered 140 of the planes—about 40 percent of the total—while other airlines have either backed off or are struggling to fill the jumbo’s two decks. “It’s an excellent plane, but it only works for the right destinations,” saysAir France-KLM (AF:FP) Chief Executive Officer Alexandre de Juniac, who aims to cancel the last two of a dozen A380s he has on order and swap them for smaller models. Carriers typically equip A380s with about 550 seats.

Chris Buckley, Airbus’s executive vice president for Europe, Asia, and the Pacific, said the company has been “at fault” in its marketing of the aircraft, letting carriers customize the interiors in numerous ways rather than pushing the plane’s ability to carry far more passengers, lowering per-seat costs.

Emirates’ president, Tim Clark, is urging Airbus to upgrade the A380’s engines. Because that would take about four years, “Airbus will be obliged to make a decision one way or the other in 2015,” says Yan Derocles, an analyst at Oddo Securities in Paris. He estimates an engine upgrade may cost Airbus €2 billion ($2.5﻿ billion) because of new work required on the wing.

So far, Airbus has orders for 318 of its mammoth jumbos—a fraction of the 1,200 it thought airlines would buy when it started promoting the A380 in 2000. Japan and China, originally seen as key markets, have been disappointments, with only one Chinese airline taking five planes. And earlier this year six jets that Japan’s Skymark Airlines ordered were canceled as the first two neared delivery. “It’s a pity,” says Emirates’ Clark of the A380. “It’s a very big cash generator for us. I just open the doors, and the people come.”

Emirates has been successful with its fleet of A380s because the airline uses its Dubai hub as a central point to connect major routes around the globe with just one stop. The A380 is also popular for flights at airports such as London Heathrow that cap the number of takeoffs and landings allowed, giving carriers an incentive to use larger aircraft. Smaller airfields lack the infrastructure to accommodate the huge plane. And airlines are adding long-haul service to secondary cities, where demand isn’t strong enough to fill an A380.

Richard Aboulafia, a vice president at aerospace researcher Teal Group, says smaller twin-engine wide-bodies targeting such markets, including Boeing’s 787 Dreamliner and Airbus’s own A350, will be the death of the A380. Says Aboulafia of the A380: “I don’t think it lasts more than a few years into the next decade.” Guangzhou becomes an A380 hub as Emirates resumes services 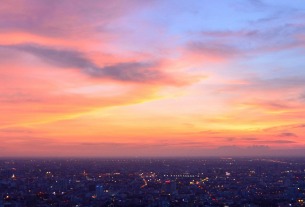